Is Max The Megapod an Open Source Project?

All of our projects are open source, and so Max the Megapod will be as well! For details see: Max The Megapod Creative Commons License Information.

When will the files be posted?

Files are posted on our public dropbox folder: VORPAL FILES. Go to the STL folder then the MEGAPOD subfolder. There is also a GAMEPAD folder at the top level (the same gamepad is used on all our hexapod projects). 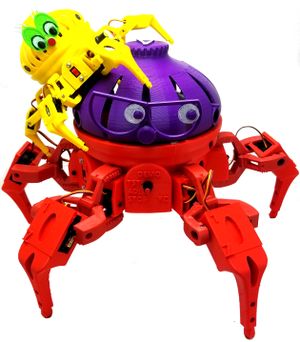 How Big is Max the Megapod?

What does the Megapod Weigh?

Max weighs about 9 pounds with a typical battery.

What type of battery does it use?

Max uses a five-cell NIMH battery pack with a nominal voltage of 6.0 volts to drive its motors, and it uses a standard 9v battery through a 5V regulator to drive the electronics (Arduino, Bluetooth module, Servo driver, etc).

Our standard configuration uses a standard size Tamiya male connector on the NIMH battery pack (there is a matching female Tamiya on the robot). We recommend 4000 mAh or more, and we recommend a minimum wire gauge on the battery of 18 gauge.

The battery specs should confirm that it can output 5 amps continuously and can handle spikes to 10amps on an intermittent basis (5 seconds maximum).

Many hobby and RC suppliers have cable converters to go from Tamiya connectors to other types (cross, XT60, etc.) so it is possible to use batteries with other kinds of connector. We are currently considering whether to offer other battery connectors on the robot, such as XT60, bullet, t-connector, etc.

A good example of a compatible battery is the Venom DRIVE series 5000 mAh battery.

Will other Battery Voltages Work

No, this project specifically requires a 6.0 volt rechargeable battery for the servos, and a 5 cell (5s in RC parlance) NIMH has all the right attributes. Lower voltages will not work, we've tried 4.8 and there's not enough torque for the motors at that voltage, the robot struggles and this may lead to servo damage. Higher than 6.0 volts nominal voltage will cause premature wear on the servos, or even destroy them instantly.

For example, you can't use LIPO batteries because a 2 cell configuration outputs too high a voltage (close to 8 volts when fully charged), and 1 cell is way too low voltage.

It may be possible to use NICAD batteries but we don't like those due to the use of highly toxic cadmium metal. NICAD batteries also generally are inferior to NIMH due to the well known memory effects, and cost just about the same so there's no real reason to use them.

Why did you use two batteries in the Megapod instead of one like in the smaller hexapod?

This is rather technical so stop reading now if you don't care to geek out on the details!

If we powered the Nano and Bluetooth modules using the 6v battery in the Megapod, momentary voltage sags would cause the Bluetooth connection to constantly drop out. We were able to get away with one battery on the smaller hexapod due to the use of LIPO batteries there that run at a higher voltage. The downside there was the need for a BEC to regulate the power down to the range the servos required. But for the Megapod version, the current requirements of all those large servos would have required a very expensive voltage regulator (BEC) if we attempted to use the same strategy. As the robot gets larger and larger, it starts to pay to split up the electrical system between motors and control logic circuits running at different voltages.

What were the main changes between the original Hexapod and the Megapod, besides size?

A lot of people think "wow this was an easy mod, you could just scale up the STL models by 200% and maybe upgrade some of the electronics and call it a day!". That's far from true! To make this work we had to make literally hundreds of changes to the STL files and did a complete redesign of the electronics. The only thing that did not significantly change was the software (the Scratch extensions are unchanged; the Arduino code only has a handful of adjustments). The Megapod represents hundreds of hours of work, testing, and rework.

Some of the most important changes are:

What type of servos does the Megapod use?

We're using genuine Tower Pro MG958 servos. We tested many different servos but found the MG958 has the right balance of torque, speed, and is economically priced. As with the small hexapod project, beware of low priced counterfeit servos on sites like banggood and aliexpress.

I know a lot of you will be tempted to substitute the lower priced MG995. It is the same size as the MG958 so it will fit the project. But beware! First of all, 99% of the ones you find on the low priced sites (ebay, banggood, aliexpress, and even most vendors on amazon) are fakes that will fail quickly. But even if you get real ones, Genuine Tower Pro MG995 servos have significantly less torque than Genuine Tower Pro MG958 servos and the robot might somewhat function but it will struggle and you really won't be happy with it. You're spending a lot of time printing these large parts and building this project, do it right! Trust me as someone who's personally built at least a hundred walking robots: skimping on the servos for a walking robot is a really bad idea!

With the MG958 this robot really shines. It leaps up off the ground on power up. It moves quickly and impressively and keeps working hour after hour, day after day. We spent an enormous amount of time researching and testing different servos, and the MG958 was the clear winner for this project.

How does the build time compare to the small hexapod?

The Megapod takes a little longer to build due to the need to install bearings and assemble some of the larger parts from several pieces (which where a single piece in the smaller hexapod). In addition, servos now require screws to hold them in place whereas on the small robot they required no screws, so that adds a little bit of build time.

I would estimate these things add about 60 minutes to the build (I can only estimate because we've only built a handful of these right now). If you've built Vorpal the Hexapod before, you should be able to complete Max The Megapod in about 2.5 to 3 hours. Compared to other hexapod projects, this is an extremely easy build. A competing kit with half the features of Vorpal/Max takes 30 hours of assembly time, for example.

If you source your own parts, the build time will be much longer, however. For our original hexapod, self-sourcers typically required at least an extra hour due to the need to solder up the electrical parts, flash nanos, configure bluetooth modules, etc. These are all things that are not necessary when building from our kits. Self sourcing Makers will find the Megapod electrical system takes significantly more time to build than the original Vorpal Hexapod (it may take two or more hours just to build the electrical system).

The upshot is, if you build from your own self-sourced parts it's going to take 5 to 6 hours, about twice as long as from the kit. And of course it may take you a couple of hours of research to track down all the parts. If you use the wrong parts, you may also need to rework things. (It seems to be extremely common for self-sourcers to buy the wrong parts or purposely try substituting cheaper or flimsier parts then finding they won't work. Trust me, we tried to find the least expensive parts that will result in a solid robot!)

How long does it take to print the parts?

Longer than the small robot ;)

We have not completed enough timing tests to give a precise figure yet. The gamepad is identical to Vorpal, so no difference for any of those parts. My best guess right now is, three to four times as long as Vorpal The Hexapod (something like 50 to 65 hours total depending on print speed, so plan on a few overnight prints to get the job done).

We will offer two options that include plastic parts:

How much filament do I need to print Max The Megapod?

We are currently estimating 2.5 kg of filament if you use our recommended print settings (which are documented in the assembly guide, see link below).

That assumes nothing fails and no reprints of course. When we print one, we make sure we start with 3 full spools of the same color. Of course, it's also fine to mix and match colors! We do recommend making the top of the gamepad the same color as the cap of the robot to keep straight which gamepad goes with which robot.

We recommend you take some time to really dial your printer in before starting the bigger parts.. Make sure your bed surface is good, your nozzle is good (or new, we replace our nozzles every 100 hours of printing and it makes a huge difference in print quality and reliability), the printer is lubricated, etc. It's heartbreaking to kill half a spool of plastic on a large part that fails 80% the way through because of some preventable maintenance issue!

What about gaming and other accessories?

Trust me, I want to joust two Megapods against each other as much as anyone! But we had to concentrate on the main robot at first.

Right now, the only accessory we've published is Megapod sized eye attachments. We will be prioritizing and releasing all the accessories over the next few weeks though, so stay tuned. I'm shooting to have all the accessories available by about mid November.

Will Max The Megapod fit on your Vorpal Field?

Alas, no, Max is way too big for the Vorpal field. He steps right over the 4 inch high walls and can't even take one step. Remember, he's 22 inches in diameter when standing, and the field is only 24 inches wide!

At Maker Faires and other demos we are using a portable dance floor. These are reasonably inexpensive (you can find many models on Amazon and other online stores) and come in 1 foot by 1 foot tiles that can be expanded to any size desired.

In most demos we're using 4 feet by 3 feet of flooring up on a doubled up pair of six-foot folding tables. If we have room and are on a level surface like an indoor floor, we go with 4 feet by 4 feet to give the big guy a little more room. Of course, if the venue floor is already a suitable surface such as tile we can run Max right on the existing floor and we've done that too. Short cropped industrial carpet is ok but sometimes the legs get hung up on a thread so it's not ideal. We're working on "shoes" to put on MAX that are designed for industrial carpet (found in schools, offices, etc.)

Note: if you run Max on a wood floor you'll probably scratch it up, so don't do that. Max weighs six or seven times what Vorpal weighs and plastic can scratch wood quite easily with that much weight behind it.