Although it seems like a lot to take in, everything is organized in major groups of functions and we have found that even small children can be successfully controlling the hexapod in just a few minutes, with very little explanation. After practicing for just a short time, you will be flipping through different modes and controlling the hexapod like a pro!

This article will explain all of these functions one by one and step by step, but for most functions it's also perfectly reasonable to just pick up the controller and experiment to learn what each button does! 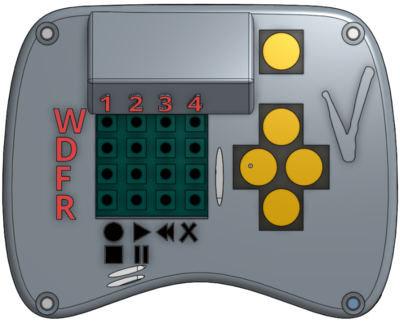 For example, in this guide might be a description such as "First press mode button W3, then forward." That means you first press button W3 for a moment, then after that press the yellow button at the top of the diamond, which is "forward".

Everything works consistently, in general all you do is:

As a simple example, to access a normal walking mode, just press W1. After that, the D-PAD buttons will move the hexapod left, right, forward, or backward. The special button will cause the hexapod to "stomp" in place without moving. It's that simple. 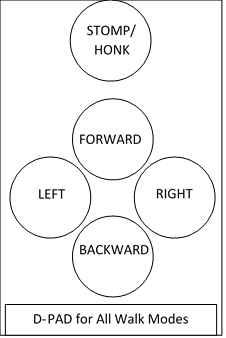 The four walk modes are accessed by selecting a mode from the "W" row. You'll be using these a lot, that's why they're on the top row. These are also easy to understand, because the D-PAD is used exactly the same way for all four, and are very intuitive. As you can see in the diagram to the right, the walk mode D-PAD "forward" button walks forward, "backward" walks backward, etc. What could be easier than that? The special D-Pad button does a "stomp" in place and also beeps the buzzer as if you're honking a horn.

The four walk modes are:

Each fight mode has a unique D-PAD configuration, but with a little practice you'll know them all. The diagram below shows how the D-PAD is used in each of the four fight modes.