The MG90S servo may be the most widely copied hobby servo today. Originated by the manufacturer Tower Pro, it is widely copied, cloned, and counterfeited.

This article will explain the differences between genuine Tower Pro MG90S and commonly available clones and counterfeits.

For the purposes of this article, we'll use the following definitions:

The Tower Pro MG90S has these characteristics:

These servos are manufactured for Vorpal Robotics, LLC by the actual Tower Pro corporation, and they use the same high quality gears and other components of the MG90 line of servos from Tower Pro. They are analog and so have a wider deadband and some other differences from standard Tower Pro MG90S (or MG90D or similar) servos. These modifications make them better suited for small robotics projects such as [Vorpal The Hexapod].

The specs are very similar to the Tower Pro MG90S. They're the same size and weight. There is slightly less torque but also slightly less power consumption. This makes battery life longer for the hexapod project than if you used standard MG90S servos, and there is more than enough torque for that project in any case.

These are the preferred servos for Vorpal The Hexapod because these servos will not exhibit "hunting" behavior (see below) and will gain approximately 20 minutes of battery life as compared to genuine Tower Pro MG90S servos.

While it is difficult to be specific due to the large number of counterfeiters, generally speaking this is what we have found after examining thousands of counterfeits:

The technical specs given by vendors who sell counterfeits will appear to match the real Tower Pro specs, however, these specs mean nothing because these are not genuine servos!

Typically the clones will have less than half the torque, be much more sluggish when responding, and will consume more power than the genuine Tower Pro MG90S servos, making battery life poor.

Many clones are identical to counterfeits (other than the label) had have all of the same problems.

However, there are some manufacturers who put their well known brand name on clones, and they do a good job of ensuring quality.

One of these "good clones" is the Turnigy MG90S, sold by Hobby King. This MG90S clone is very good quality. It really is digital and has good torque and speed. Personally, we prefer the Tower Pro MG90S gearboxes though, because from our testing the real Tower Pro MG90s have a little smoother gearing and don't have any noticeable binding when turning by hand. But if you use the Turnigy MG90S you'll get a good servo at a nice price.

How to Tell Genuine Tower Pro MG90S from Counterfeits

If the label is the same, how are you supposed to tell whether you are getting real Tower Pro MG90S or counterfeits?

There are some definite red flags to look for:

There are also some physical characteristics to look for that are pretty obvious and can be used even if all you can see is the label. Again, we have to caution that there are many different counterfeits and clones, we're only showing one of the most common ones here.

A few characteristics of the label printing style are a dead give-away as shown here: 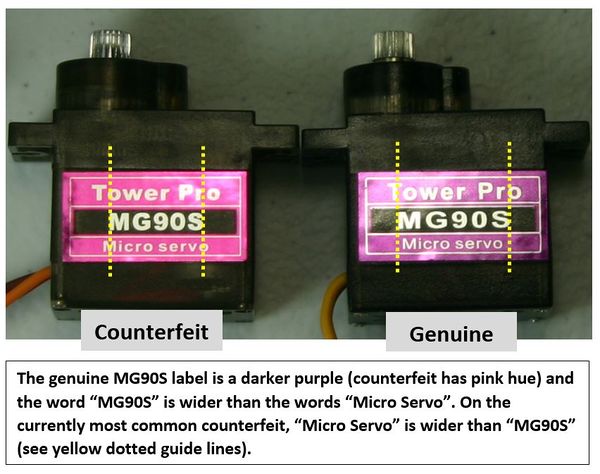 From the top view, the genuine Tower Pro MG90S has deep "dimples" around the bracket, and the washer under the plastic where the shaft comes out of the housing is dark in color. By contrast, fake MG90S have little or no dimple marks and have a light copper colored washer under the shaft. Copper is a cheaper metal than the high quality aluminum used in the real Tower Pro servo. 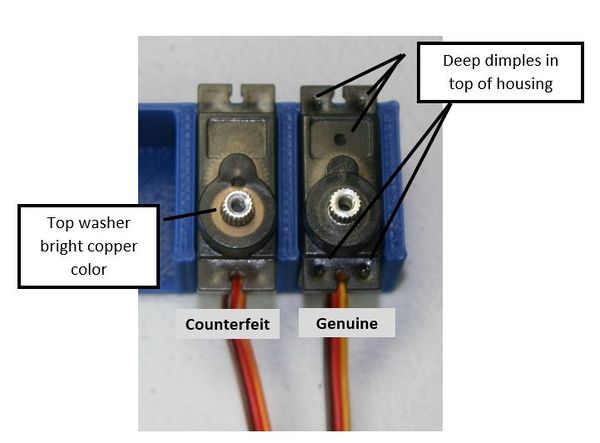 While the genuine MG90S are superior in just about every way imaginable, there are a couple of things you need to know when using them with Vorpal The Hexapod.

The information below also applies to "good clones" that are digital like the Turnigy MG90S.

Digital servos have far more torque and are far faster than analog servos. They also have a very narrow "deadband" meaning they generally have much less error when reaching a commanded position. This is all great news! But there is one side effect of that extra power and narrow deadband that is undesirable: hunting.

Let's consider a "hip" servo (the servos attached to the base) swinging a leg to a new position. Because the leg has weight and therefore inertia, what can happen is that the hip servo overshoots the desired position. The greater speed and torque of the digital servo makes this much more likely than with an analog servo. Once the servo overshoots, it needs to reverse power and try to bring the leg back to where it's supposed to be. Because of the very narrow deadband, however, it is almost impossible for the servo to reach the desired position without overshooting!

The result is a rapid quiver around the commanded position. This situation is called "hunting". The servo is searching, or hunting, for the desired angle, but it never finds it because the inertia of the leg keeps causing it to overshoot beyond the deadband range.

Because hip servos have no intrinsic bias, the leg can resonate like that indefinitely. The knee servos, on the other hand, do not exhibit this kind of hunting behavior to any significant extent because gravity biases the movement in one direction and not the other. This causes the hunting resonance to break up before it even starts.

If you are using our Vorpal brand MG90 servos, you will not have this issue since that servo is optimized not to hunt when used in our kits.

If you are using real Tower Pro MG90S or MG90D servos (which are digital) the solution is actually quite simple: add a small rubber washer or O-ring to the shaft of the hip servos. All of the kits we provide that have genuine Tower Pro servos come with the right size washer (some of the first kits we sent that included Tower Pro servos had O-rings instead, which also work). You just slip this on before you put the servo horn on the shaft.

The reason this works is that it provides a little bit of friction that damps out the resonance effect. This friction reduces the amount of overshoot enough to kill the resonance.

Note that without the servo horn screw in place, the leg may still exhibit "hunting". The screw is needed to clamp down on the servo horn and press it against the washer. You should only tighten the screw enough to stop the hunting behavior. We don't want to add so much friction that battery run-time is reduced.

Normally you only need the washers on the hip servos. Sometimes the front two legs will show some of the quiver associated with hunting when in F1 or F2 "fight" mode. If you want, you can add washers to the knee servos on the front two legs to damp out the hunting there, but it's not really necessary. Some people think the knees quivering like that in fight mode actually looks cool!

Both analog and digital servos are subject to oddities that occur due to electrical noise. Because Vorpal The Hexapod has 12 servos all sharing the same power supply, there can be some feedback in the signals going to each servo which causes this noise.

For analog servos, this will usually manifest as little clicks and twitches in the servos. For digital, that can also happen, but sometimes a more serious situation occurs where the servo goes off to a weird angle for a moment.

The Vorpal branded MG90 servos do not have this "weird angle" problem because they are analog servos.

If you are using digital servos in our Hexapod project and you see this issue, the solution here is to make sure you're running the Vorpal Hexapod robot code that is optimized for digital servos. In our source files, it's the version of robot code with the word "DIGITAL" in the filename. This code runs the signals much more quickly out to the servo, at 120 Hertz rather than the 60 Hertz we used to use for analog servos. The faster signal doesn't stop the noise, but it causes new updates to go to the servo more quickly which allows the noisy signal to be overridden by a good signal in a shorter time. You will still see the issue, but not as often and when it occurs will won't persist as long.