What is the Hexapod Grip Arm?

The Hexapod Grip Arm is an open source 3D printed project that provides an arm with a claw end-effector. It's designed for [Vorpal The Hexapod] and will plug right into the accessory port for that project. It could easily be used with other robotics projects as well.

What are the Capabilities of the Grip Arm?

The Grip Arm can:

The Grip Arm is intended to be used with Vorpal The Hexapod for activities and games, not to lift heavy objects.

Assuming you have the Grip Arm assembled and installed along with the latest version of robot firmware, you may control it using the gamepad it as follows:

The Grip Arm will retain its position even when you switch to other modes. For example, you can open the claw, raise the arm, then hit W1 to walk. The arm will remain in its last position until you go back into F2 mode and change it.

As you hold DPAD buttons, the arm will move at modest speed, allowing you to stop where you need it to be.

NOTE: The robot goes into sleep mode when it's in any walking (W) mode after five seconds of inactivity. The Grip Arm servos will also go to sleep in this case. Clicking any DPAD button will wake up all the servos and they'll return to their prior positions. 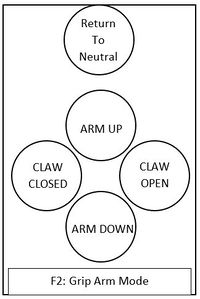 A complete kit is available from The Vorpal Robotics Store

Tools You Will Need

To control the Grip Arm using your gamepad, you will need the right version of the robot code. This code needs to be installed before you start to build the Grip Arm, because you'll need it to adjust the servos and install the servo horns in the right orientation.

If you bought a robot kit from Vorpal Robotics after December 1, 2018, then your robot already has the new version of code that supports the Grip Arm and you can skip this section.

If you bought from us before December 1, 2018, then you need to follow instructions to flash the new robot code. The instructions to do this are here: Flashing the Robot Code.

Take the cap off the robot and remove the screws holding the electronics caddy in place.

Carefully lift the electronics caddy and locate the Servo Driver board. (It's the large electronics module in the center of the caddy, the one that all the servo wires plug into.)

Carefully wiggle the Servo Driver out of the electronics caddy. Disconnect any long, 20cm jumper wires in ports 12 through 15. The Grip-Arm servo extension wires will be replacing those. Move the Buzzer power wires to port 14 and move the BEC power output wires to port 15 (if they're not already there).

At this point ports 12 and 13 should now be clear of any wires. Plug the end of the servo extension labelled SD12 into Servo Driver port 12, and plug the wire end labelled SD13 into Servo Driver port 13. Be sure the white wire on the extension cable matches the yellow pin on the servo driver, and the black and red wires match up to the black and red pins.

Do not disturb any of the hexapod leg or hip servo connections which are in ports 0 through 11, and do not disturb the SDA/SCL connections on the end of the Servo Driver. The diagram below illustrates these connections. 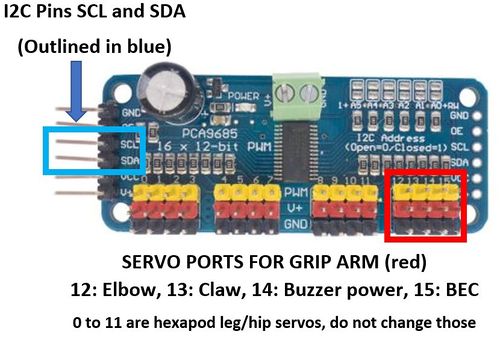 Carefully insert the Servo Driver back into its spot in the electronics caddy.

Route the other ends of the two servo extensions you just installed to the accessory port such that the ends labelled CLAW and ELBOW are sticking out of the port.

Place the electronics caddy back on top of the robot. Do not screw it in yet, just in case you accidentally unplugged something. Later after testing you'll screw down the caddy again.

Now we're going to plug the Grip Arm servos into the extension wires and orient the servo horns properly.

Start with the robot turned off.

Plug the Vorpal Brand MG90 servo into the servo extension marked ELBOW. Make sure the BLACK/RED/WHITE wires on the extension cable match the BROWN/RED/YELLOW wires on the servo.

Similarly, plug the SG90 servo (blue housing) into the servo extension marked CLAW. Again, make sure the wire colors match, the lightest colored wire on the servo should match the white wire on the extension cable.

NOTE 1: It is very important not to mix up the two types of servo. The SG90 is a plastic gear servo and it's being used on the claw because the claw needs to be as lightweight as possible, plus the claw does not bear anywhere near as heavy a load as the elbow does (the elbow servo must lift the entire arm plus whatever it is grabbing!)

NOTE 2: There is a spare SG90 servo in your kit. Plastic gear servos will break if over-used. Don't try to lift heavy objects, and don't clamp too tightly on objects that are larger than about half an inch wide.

Now, insert fresh batteries in the robot. Turn the dial to STOP mode, then turn the robot power switch ON.

After beeping a couple of times the robot should come to a standing position. You should also see the two Grip Arm servos twitch.

The software puts both Grip Arm servos in a 90 degree position during STAND mode. Remove the single-arm servo horns from the servo packages. (Don't mix up the two different kinds of horn, the white horn goes on the SG90 and the black horn goes on the Vorpal MG90).

Insert both horns so that they stick straight out from the servo, as closely as you can. Because there are a limited number of spines (grooves) on the servo horns, you may not be able to get it 100% exact, but do the best you can. The illustration below shows the ideal placement.

Now let's test the servos. Turn the robot off. Carefully and slowly move the horns on the two Grip Arm servos away from the 90 degree position (do not remove the horns! Turn them a little by hand).

Now turn the robot back on. (It's still in STAND mode.) Do the two Grip Arm servos move back to the 90 degree position you put them in before? Or does one or the other (or both) not turn?

If one or both Grip Arm servos fail to move back to the 90 degree position, carefully press on the servo horn to see if the servo appears to be under power or not. If it moves freely without resisting you, it has no power. Here are some possible causes:

Okay, if you've gotten this far, all the software upgrading and electrical work is done. Now we just need to put together all the mechanical parts, which doesn't take very long!

A Note on Assembling the Joints

Here's a general concept we'll use several times in the build. This design uses several simple bearings made from a small nylon tube, a screw, and a washer. Nylon has good self-lubricating characteristics and these bearings will allow the arm to move freely, plus this design is compact and inexpensive. In each place that has this kind of bearing, there will be two moving parts that make up a joint, and one of the parts will have a larger hole (7mm or a bit over 1/4 inch) for the nylon tube, and another will have a smaller hole for the screw. The screw will have a washer on it so it doesn't pull through the big hole, and it will go through the nylon tube and then the screw will self-thread into the smaller hole. This is illustrated below. 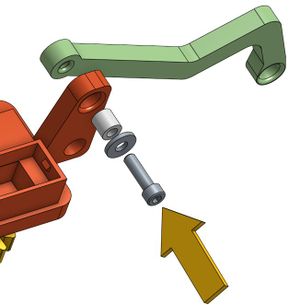 The spacing is such that even if you fully tighten the screw, the joint can still move (i.e. the nylon part is slightly longer than the depth of the hole it goes in so there's always a bit of play).

Do not overtighten the screws! When they're all the way in, stop turning. Otherwise, you'll strip the plastic that they're self-threading into.

The arm has two components: the Claw Arm on which the claw structure will be mounted, and the Claw Arm Guide which is just a bar that helps keep the claw approximately level as it raises and lowers.

Follow the illustrations below to assemble each piece of the Arm.

The Claw Arm plastic part has a channel running down along much of its length. Thread the SG90 wire through this channel, this will keep it organized and prevent it from getting snagged.

There is also a wire guide on the Grip Base plastic part, you can optionally run both servo wires through this to keep them secure and guide them nearer into the accessory port.

Mount the Arm on the Hexapod

If it doesn't work, here are some common issues:

The Hexapod Grip Arm is licensed under the Creative Commons Attribution-ShareAlike International 4.0 license.