BILL OF MATERIALS (BOM) FOR MAX THE MEGAPOD

Notes on Sourcing Parts Yourself 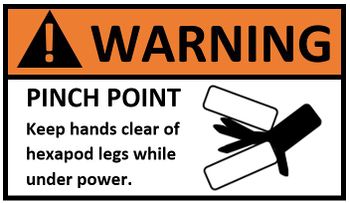 This section assumes you have basic familiarity with 3D printing and 3D printing terminology. If not, you might want to reference online materials such as youtube videos or information from your 3D printer manufacturer before attempting this project.

We have posted the STL files our public dropbox folder: VORPAL FILES. Go to the STL folder, then the GAMEPAD and MEGAPOD folders have the files you need. (The same gamepad is shared among all our hexapod projects).

This project has been finely tuned to make it easy to 3D print. No supports are required for any of the parts (there is a support built into the models for the CAP parts). In some cases you may want to use brims or rafts to help parts adhere to the print surface.

There is some significant bridging with some spans up to 30mm (1.2"). It is important to tune your printer and make sure it can handle the bridging before attempting the large parts. A little sagging is ok and a drip or two can be easily removed, but you need decent ability to bridge. There are bridge testing and calibration models posted on sites like Thingiverse that may help you tune your printer before trying the big parts.

We print using the following settings on a Lulzbot TAZ 6 with 0.5mm nozzle:

Other than removing brims/rafts and the occasional drip, there is not any special post-processing required after printing. Some of the big bridges might seem a little saggy but generally speaking there's enough tolerance that this won't cause an issue. The biggest bridges are mostly hidden inside the robot so they won't affect cosmetics.

You will need the following tools:

The motors on Max the Megapod are very powerful compared to the smaller Vorpal the Hexapod project. It is possible for the leg motions to pinch fingers or even possibly break fingers or cause other injuries. When powering on the Megapod you must keep fingers clear of places where the legs/hips can come together. In case of electrical issues the legs may move unexpectedly. Turning the power off will release the motors. Never let small children play with the megapod or grab at it when it's walking or moving.

If the robot is moving in an out of control manner, use a pencil, book, or rod to hit the power switch, which is large and easy to turn off.

You must at all times take standard precautions that are typical with large robotic projects.

If you are building your own electrical system please do not skimp by skipping adding the fuse to the circuit. This project may draw significant amperage and fuse protection is required.

This is easier to do before the Base is assembled into a single part.

STEP 2: Build the BASE

STEP 3: Install the electrical system in the base

STEP 4: Insert servos in the chassis

STEP 5: Insert the servos in the Legs

The technique is very similar to inserting the servo into the chassis.

STEP 6: Plug in the Servos

Thread the servo wires into the chassis using the routing holes, as you did with the hip servos. The power distribution harness has marked servo extension sockets for each servo. Each hip servo is marked on the BASE showing its number. the knee servo for each hip is numbered six higher than its corresponding hip. For example, hip servo number 3 will be attached to knee servo number 9, because 3+6=9. 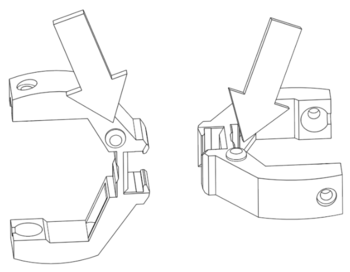 Align the leg hinges as shown here. The bumps (see arrows) should both be near each other when properly aligned. Hold one in each hand with the ends of the U shape between thumb and forefinger.

Each leg hinge is composed of two identical U-shaped parts. Take one in each hand and align the two so that the bump (shown in the diagram at the right) are both near each other. Turn one 90 degrees with respect to the other.

The leg hinges connect the hips to the knees. They only go on one way. If you made sure to align the bumps when assembling the leg hinges, this will result in correct orientation of all legs.

STEP 10: Enclose the electronics modules in their caddies

Now things look pretty messy with all those wires hanging loose, let's clean it up by stowing the Arduino Nano, Bluetooth module and Servo Driver in their caddies. The caddies will keep them safe by making sure they can't short out against each other or touch screws, etc.

Make sure the on/off switch is off, and the knob is turned to STOP. Insert batteries and power on the robot using the on/off switch. You should hear a beep, a pause, then a second beep. The servos should all twitch into position. If the robot does not move at all, immediately turn the switch off and check your connections again. If some of the servos don't move then gently push them with power off to see if you can free them up. If they still won't move, try pushing them with power applied, but turn off the power within 30 seconds if they're locked up. If you can't get the servo to move it will need to be replaced.

The servo horn should come straight out from the body at a 90 degree angle as shown here. Do not turn the servo shaft by hand until after it has moved under power!

The servo horns are all at random angles right now due to the servo pre-check. In this step we'll make them point in the right direction. The knee servos are not at 90 degrees when the knob is all the way counter clockwise, rather they are at a 30 degree standing angle.

We need to get them to 90 degrees so its easy to align the servo horn, and this is done by going into "Adjust Mode". Turn the knob very slightly clockwise until you hear a beep, then stop. After about one second you will see all the knee servos twitch. This is "adjust servo horn mode". All servos (knees and hips) are now at their halfway point, 90 degrees.

Now you need to take each single arm servo horn and carefully insert it on the shaft so that it is sticking straight out as shown in the figure. You will not always be able to make the horn come totally straight out. This is because there are only 22 little groves (splines) in each shaft, meaning you can in general only come within about 8 degrees of being at a perfect 90 degree angle. This amount of error is acceptable for now, just get it as close as you can. Later we'll use Trim Mode to make fine adjustments.

Turn the knob fully counter clockwise (to STOP) and the robot will go into "stand still" mode. Place it on a level surface such as a table top. Do all of the legs touch the ground? If one or more legs don't touch the ground, you need to adjust the servo horn on the knee a little bit so it does touch. Gently pull off the servo bracket. Pull the servo horn off, and put it back on just a little bit moved so the leg would move closer to the ground. Put the servo bracket back on, and see how it looks. Do this until all legs are at least slightly touching the ground. Again, you can't necessarily be perfect due to the 8 degree increments the servo horns can be moved. But you should be able to be close enough that all legs at least slightly touch the ground.

Now that the legs are adjusted, you can insert the M3x12 screws (with M3 lock washers) into the servo horns to lock them in place. Note that you will NOT be using the screws that were in the little bag the servos came in, you'll be using the separate pack of screws, which are longer than the ones in the servo bag. Do not overtighten these screws, as you could possibly crack the servo brackets. Just turn the screws until you start to feel resistance, then turn a quarter turn more and stop.

STEP 15: Store electronics and wires in the Base

Carefully stow the caddies into the base, using any available convenient space. Arrange the servo and other wires so they don't cross any screw holes. The three Base Cover parts can be used to secure everything, however you may not want to put in more than one screw each at this point, until the robot is more fully tested. Be sure the two battery connectors come through the holes provided for them in the Cover parts.

There are two a self-stick choking hazard warning labels in the hexapod parts bag. Peel the backing off one of them and place it on the bottom of the robot, near the center. Retain the second label for the gamepad.

When you assembled the servo horns onto the servos, you probably were not able to get them all to come out exactly at a 90 degree angle. That's not your fault: the servo horns only have 22 possible positions in which they can be installed, so at best you can come within plus or minus 8 degrees of perfection.

Now that you have the gamepad working, you can make fine adjustments to the servo positions using "Trim Mode". In this special gamepad mode, you can adjust all the servos. These adjustments are saved in the robot's EEPROM, which is memory on the Nano that retains data even when powered off. So, you only need to trim once.

Complete instructions on how to use trim mode are in the wiki page: Vorpal The Hexapod Trim Mode Guide. That guide was written for the smaller robot, but the instructions are identical for Max the Megapod.

NOTE: although this step is optional, it is recommended because your robot will walk straighter and all the servos will share equally in lifting the robot's weight, which will make them last longer.

Glue a magnet into the magnet hole on both sets of eyes. The magnet should have the marked side face down, not showing.

You can use hot glue, "superglue" or any other kind of glue that works on plastic and metal.

If Jumper Wires Are Too Loose

Sometimes you will find a wire whose connector does not grip the pin well enough. It might fall off very easily or just by gravity alone. If that happens, you have a few options: 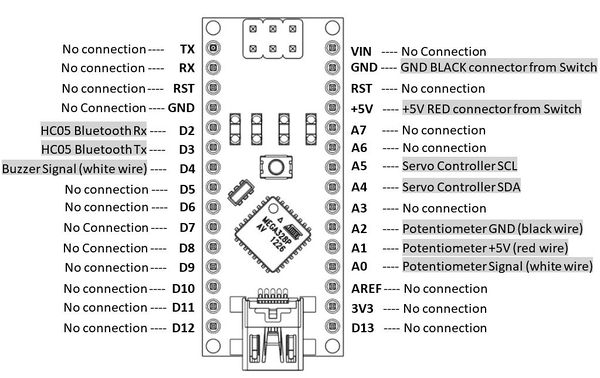 Diagram of Nano connections for the Hexapod. Jumpers marked AP are routed to the Accessory Port for use with add-ons like sensors. Click for larger image. 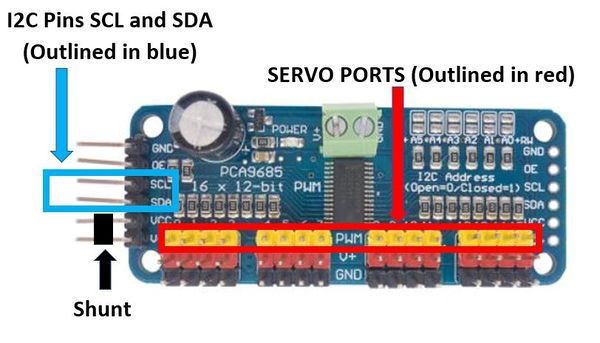 Diagram of Servo Controller pins you will use in this project. Each servo motor has a 3 wire connector that should be plugged into the corresponding servo number extension connector in the power distribution harness. The white wires coming out of the harness in groups of four should be connected to the yellow line or ports, matching the number ranges to port numbers. Note that the black and red rows of pins are not used, power is provided to the servos through the power distribution harness. Click for larger image.

The gamepad for Max The Megapod is identical to the Gamepad for Vorpal The Hexapod.